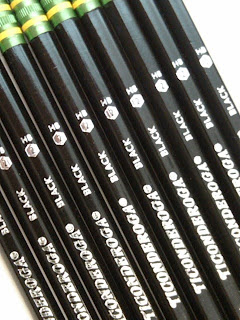 I've decided that back to school shopping is much more costly than Christmas shopping.

This is the very best time for me to stock on supplies for my classroom, such as highlighters for editing, index cards for various activities, glue bottles because teens never learn to close them, and red pens so I can make people feel bad all year long. Of course, I also need to stock up on things that make me happy, like good pencils, post-its, and correcting fluid. Since I've been cranky with my job, I have not gone overboard on these essentials, which I've sniffed out at good sales, and of course, I'm keeping my receipts for tax purposes.

As all of you teachers and moms know, these professional needs are compounded by The School Supply List each of my children has. I only have two, and thankfully, the older they get the less they need.

My son, who will entering 4th grade needs everything except crayons. I'm going to hold as much as I can at home because within all my crankiness, I am irritated at the idea of buying my son 6 boxes of pencils that he has to share with other students who brought none. Oh, but when I say that aloud, my heart breaks, and I want to help those poor kids whose families can't afford it. Seriously, though, who can't afford some pencils? Oh, yeah, but add that to the other 20 items on the list and multiply that a few times because stereotypically, if there's one poor kid whose family who can't afford pencils, he probably has a sibling. Or two. Or three. I'm way off on a tangent here, but this List--it's tough.

It's not the pencils that bother me so much on the The List. It's the tissues, hand sanitizer, hand soap, paper towels, and sandwich bags that bother me. I'd like to supply these for my children's classrooms because I know what a cesspool those classrooms must be. I know how dirty my son gets, and I have my own classroom. I need to go sanitize just thinking about it. I'm irritated because a few years ago my principal told us that we could no longer ask our students to bring these supplies in. Originally, I thought it was a district command, but then I think it was something about how families could not afford it...Well, my own children go to a Title 1 school, and there is it always on the list. A colleague of mine, who is tighter yet more loving than I am, brought rolls of toilet paper (an idea that was used school-wide at the alternative school where I teach every night), and rationed out sanitizer. Great idea to keep the cost low, but remember back in the day when we didn't haven't to shoulder that cost? If each of my students was asked to bring in one box of tissue and a bottle of sanitizer, it would be enough for the entire team of teachers (12 of us) to use all year. That's actually less than what elementary students are asked to bring.

My daughter is entering 6th grade this year, and her School Supply List was shockingly simple: paper, a package of dividers, pencils, pens, two binders, and a student planner (they buy that at school). It was also suggested that she have a flash drive, but she already has one. Now, those binders are incredibly expensive, but from experience, I know that one gets what she pays for. Interestingly, tissues and sanitizer were not on her list, so either her principal has the same edict as mine, or the kids at her middle school are less contaminated with kid germs than the ones at my middle school.

Speaking of incredibly expensive--have you seen how much backpacks are? I think I ended up paying $60 for two. And they were on sale! I like to force my kids to use their backpacks for more than one year. This worked out well for my son, until about two months ago when his Jansport started falling apart everywhere. (Aren't those the ones that are suppose to last a lifetime?) But then I also discovered he was keeping a rock collection in his backpack. My daughter went through three backpacks this year, and she wasn't collecting rocks. I've seen backpacks advertised for $5 at various places, but I don't even stop to look. I'm pretty sure I cannot afford to keep my kids in $5 backpacks all year.

Oh! Yesterday while we at Office Max, my sweetie found a backpack--his zipper is ripping out--for only $55. Actually, that's not a bad price for a backpack/laptop bag, especially since I think they are closer to $100 at Fry's. It's just that...well, it's another $55! Last spring, I wore out my favorite tote bag, and I've been on the hunt for a new one. (Yes, I'm a real teacher. I do have dozen of tote bags from conferences, but they have neither pockets or a way to close.) In the last few weeks of school, I took to using my backpack from college. You know, the one I bought in 1990. So, do you think that my sweetie can hold out until Christmas for a new bag? Or at least next month? I hope because we're just about B-R-O-K-E.

In other words, pencil rich, but cash poor. 'Tis the Season.
Posted by HappyChyck at 12:30 PM

What bothers me is that teachers often offer extra credit to those who bring in Kleenex or sanitizer.  It inflates the grade and makes those who can't afford it feel even worse.

BTW:  A friend of mine sent her Jansport back to the company, and received a replacement.

happychyck said...
This comment has been removed by a blog administrator.
11.8.10

I was just thinking the other day that if I'd saved the receipts for all the office supplies I've bought for my classroom over the years, they'd add up to a tidy sum. Maybe it's better not to know, though, correctamundo?

Save your reciepts for supplies. You can write off your taxes up to so much without reciepts, I learned when I was teaching art. If I would have saved my reciepts, I would have recovered nearly every extra I spent.