The Teacher Shows Up to Lay Some Smack Down

I've been on summer break for a few weeks, and for the most part, I am having no trouble forgetting what life is like for the workin' folks. Unlike Mister Teacher, I have not been doing any lesson planning at all.

The teacher in me is on vacation!

She popped up for a visit this after when I went to the grocery store and reprimanded the bagger, who might have actually been an adult, but he looked like a teenager to me. He was acting like one with the checker, who also happened to be a floor supervisor, when he had the audacity to claim that she didn't tell him to do something that she said she had. It wasn't just a claim, either. He was arguing with her. You know how these kids get. They just can't say, "Oh, I beg your pardon. I didn't hear you." And then do the thing they were suppose to do. No! They have to argue and bicker.

Hey, I know kids like this. Some of them are contrary just for sport. (My stepson is this way, too, and he may not even live to be a teenager if he doesn't get it in check.) I'm not going to say that I don't get dragged into a little spat from time to time, because sometimes it just happens before I even realize I'm in the middle of a stupid argument that I should win but probably won't. My stock comment is, "I'm not your mother. Don't talk to me this way." (With my stepson I say, "Excuse me? Who are you talking to?") Okay, usually that just makes the kid angry because apparently I've insulted his mother in some way, but 99% of the time it ends the scene.

Back to the grocery store--the bagger was being a punk, trying to pick a fight with the checker about what he claims she didn't tell him to do, and I interjected, "You know, it is a poor reflection on you to be doing this right in front of me." He looked smug, but a little confused that I should insert myself into his argument as I continued, "No, really. It makes you look like you aren't the star employee you should be." Not a big deal at all, right? But he stopped talking and started bagging my groceries.

Of course, this message could have been for the checker, too, but she was old enough to remember a time when subordinates had the sense to say, "Yes, ma'am," and move on. She was probably ill-prepared to have to deal with his immaturity in front of customers.

The truth be told, I was a little embarrassed that I said anything. This was totally none of my business, but that little teacher just popped out of my mouth before I even knew what happened. Not that I was embarrassed or sorry enough to apologize, though!

(Did I tell about the time when my hallway teacher voice came out when went to the movies?)
Posted by HappyChyck at 10:25 PM 4 comments: 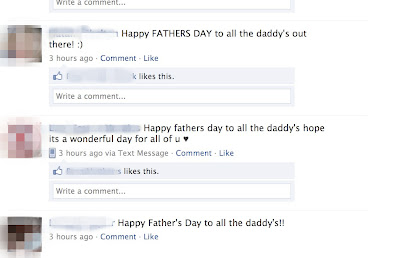 And these are people I know from different parts of my life... One is my colleague, one is a high school classmate, and the last one is a former student. Two of the three have at least one college degree. Sigh. Three in a row on my feed! Is this a conspiracy?

I know I shouldn't judge because I make plenty of errors when I post my status--especially when I post them from my phone. My excuse is that I am a terrible texter. Seriously, I'm a bumbling idiot. I often delete posts when I see that I've made some stupid error, which usually includes misspelled words or omitted letters and words. It's embarrassing to me!

When it comes to the people I know and their little errors, I am not usually a snob. It makes some friends and family uncomfortable enough just thinking that I judge them, which I don't. I really don't care how they talk or write to me. I love them, and we are not part of the elite. We are just folks. (Children are a different matter, though.)

However, there is that other part of me. The English teacher part. I can only be bombarded with so much non-standard English usage before I start to feel like I am being assaulted. Yes, assaulted. It's one of those straw-that-broke-the-camel's back kind of thing. I'm irritated to the max, and if I didn't enjoy being able to catch up with friends and family around the world through Facebook, I'd quit the site entirely. So, I'll be taking a break. Right now Facebook ranks right up there with this brain-numbing site.
Posted by HappyChyck at 11:18 AM 1 comment: