The teachers at our school are, once again, having a t-shirt contest for the CRT. The winner earns a day off while an administrator subs the class. Last year my t-shirt was a winner, so you know I couldn't just slide by this year. (Especially after the chair of the social club stopped by my room to throw down a challenge.)

So, I started off the first day of testing with this shirt, which I thought was cool looking, but the print was so small, the point may have been missed. (I blurred it out here.) I gave credit to the testing director, the other administrators, with distribution to all of us teachers who have signed legal documents saying we wouldn't compromise the integrity of the test. Attribution to the writer was given to Nobody Knows and the soundtrack credit was given to the noisy construction site next to our school. Of course, the stars of the show: Students who are NOT being left behind. The second day of testing I decided to bring some star power. I wish I weren't so culturally inept because I might have been able to do a play on some songs the kids like or something...The shirt was a big hit, though. (The original design had our school name in it.) I had to explain to some that "Yes We Can" is a big catch-phrase in Obama's campaign. Some of my Hispanic kids said, "Oh yea! Sí se puede!" Uhm, yea. And then everywhere I went, my shirt inspired some political debate. Usually my clothing inspires...nothing. That's good, though. It gave my students something to do in the HOUR we waited in the testing room for the rest of the school to finish. 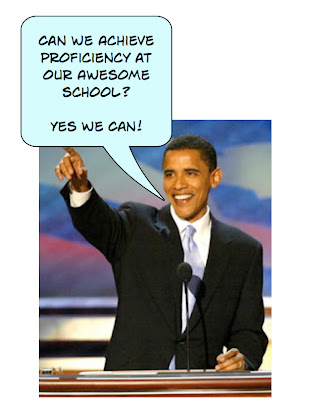 On the third day, I struggled to come up with something. You should see the t-shirts my colleagues have made! They have borrowed catch phrases from just about anything in our culture you can think of. My style is a little quirkier than, "Can you test me now?" with the Verizon guy, and I didn't think cute like iTest, so I was stumped. Finally, I made a shirt that the testing director could appreciate. My students got it a little, too, because I tell them not to discuss the test with their classmates after they are finished. I've even told them I am not allowed to look at the questions, let alone help them in any way. 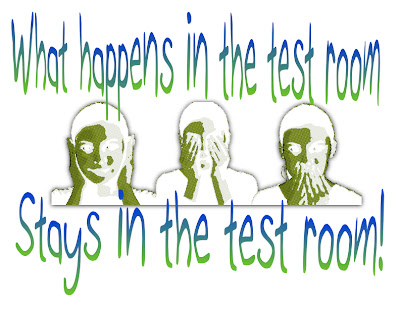 On the fourth and final day, I decided to keep it simple and to the point: 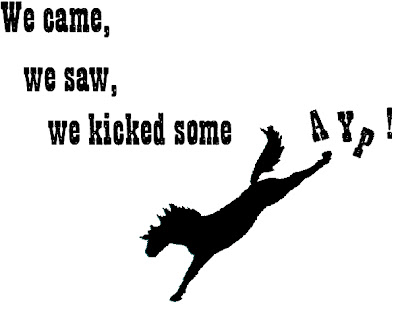 Considering we ended up administering the CRT five weeks earlier than we'd originally planned, I am crossing my fingers that we kicked some AYP this year. We need any good mojo we can get! I've heard that some schools have been crippled by this error (still not sure if it was district, state, or testing company), but our administrators have repeatedly commended us on our professionalism and ability to go with the flow under pressure.

It's always easier to go with the flow with some humor and joy in life!
Posted by HappyChyck at 8:17 PM No comments:

Life in my classroom and with a student teacher has been a little hectic. We started off the quarter with in interim test. Then we had a writing proficiency boot camp in the second week, followed by the state writing assessment in the third week. As you can imagine, good for my student teacher to see how testing takes over our lives at times, but there wasn't a lot she could do. So, she spent a large chunk of time planning her Anne Frank unit.

Our team is also working on a big project this quarter, so we had to plan when to squeeze research in along side Anne Frank. It's a bit awkward, but we always have more than one thing going on, and the beginning of instruction for research strategies was to begin last week, around the middle of the play.

Was. Yes, then the administration threw a big monkey wrench in the middle of everyone's lives by telling us that our big test--the CRTs--would not be the first week of April. There had been some sort of screw up at the state level, and the test had to be given much earlier. How much earlier? We're starting on Monday.

What would life be like in your school if the big AYP-determining test had been moved up five weeks, and that date was merely two weeks away?

I never planned to spend a lot of time cramming for the test in my classroom because my lessons are aligned with the standards, and students are ready or they are not. I did plan to go through some practice test questions and reiterate some reading strategies, much like I did for the writing exam, and I planned to spend time doing that during the week before the test. (The students also have differentiated skills practice from one of our online programs for homework--it puts it more on their shoulders!).)

Out with the project. In with review.

And in the meanwhile, the social studies teacher asked if I could review works cited information with the students, which is a concept had pushed back after until after testing was over. The big team project we're doing is originating from the foreign language classes, and I'd asked those teacher to push back their project start date because of testing, but the social studies teacher had already assigned her big quarter project at the beginning of the quarter before the test was rescheduled.

Part of me wanted to tell her what to with her reviewing of the works cited...but you know I'm there for the kids. I stepped in one day and presented a quick PowerPoint to the students where I basically told them to not make it harder than it really was, where to look the MLA citation guidelines, and to use a citation machine. Use the resources and tools available rather than faking it--for crying out loud! It may have a been a pointless lecture. I gave them nothing to practice. I have nothing to check for understanding. It's was basically, "Here's information you need right NOW. Go! Do!" I'll check them in a few weeks to see if any of it stuck when we get to the actual research unit.

Or actually, I'll encourage the student teacher to do so.

As you can imagine, it's been difficult giving up complete control to the student teacher. At this time, it might have been a little irresponsible of me, though. I am out of the room more than I am in these days, but the worrying is not on her shoulders yet.

What I miss in my classroom is a little continuity. A little flow. It's been months since I felt like my classroom wasn't a three-ring circus.
Posted by HappyChyck at 5:20 AM No comments:

A miracle has happened.

After I spent many hours (for which I was paid) working on a Wikispace for my class and team last summer, the district blocked my site. Well, they blocked all of the wikispaces. You know, social networking sites are evil. Our school tech person put in a request to the district computer gods to unblock the site, and after five months, I received notification that the requested site--my wiki--was unblocked.

The URL they unblocked isn't my page.

So close. The district computer gods added an extra letter in the wikispaces user name. So darn close.

Well, the name that's been unblocked hasn't been picked up by a wikispaces user yet. Should I take it? Can I handle the bitter disappointment if I spend 40 hours working on my own time and dime to recreate what I had, only to be blocked out again?

Oh, that's right! I'm a teacher! I drink a shot of bitter disappointment blended with martyrdom each day for lunch. Its builds healthy cynicism.
Posted by HappyChyck at 8:17 PM No comments:

"Don't forget that this is all the space you'll have to write your final essay," I walked slowly around the room showing the answers sheet that students will have to write their essays on tomorrow. Many students are concerned that they will run out of room on the paper before they get all of their thoughts down.

Victor raised his hand, "Uhm. Can we, uh, use a different font?"

I grinned and several students turned to look at poor, confused Victor. It's a hand-written exam. What's he talking about? He stumbled, "I mean, uh, the size."

"Yes, Victor, you can use a smaller font, but I'd say no smaller than 10 point. People need to read it!"

Jason joined in the joke: "Should we use Times New Roman?"

"No, Helvetica is a san serif font. Use it for titles, not for large sections of text."

Sarah also piped in, "Well, what about Comic Sans?"

"I suppose if you must," I said bringing our silliness to a close. "Any other questions before we begin?"

My computer-dependent students chuckled at our joking before picking up their pencils and beginning their writing assessments.
Posted by HappyChyck at 5:09 PM No comments: