The deadline to collect textbook was today, and by some miracle, I collected every single one of my books without having to write a fine slip.

A few years back, in a fit of anger, I assigned homework to students who did not return their books on the day I collected them. In a lot of ways I don't even agree with my behavior. Punish students with homework? Eh, well. Sometimes we gotta do what we gotta do.

I told the students, "There are so many things we did not learn this year, and it is evident that you are still willing to learn because you are keeping your textbooks. Here are some exercises that will help you. This is not busy work. These are weaknesses from your writing that I've noticed could use some attention."

The truth is that few of the students did the homework, but they did bring their books in. That was the objective! I didn't grade or penalize the lack of homework. It wouldn't have affected their grades anyway. Shhh! Don't tell them that.

As I was leaving today, one of the near-retirees was in the office picking up fine slips to fill out. I proudly told him that I had collected all of my textbooks and how I used homework as leverage. It worked like a charm! He patted me on the back and said, "You keep telling yourself that."

Burst my bubble.
Posted by HappyChyck at 5:48 PM 1 comment:

It's been a long year with my students since October. They came with a bad reputation, and except for a few weeks early in the year, they lived up to it.

You know, let me just insert here that sad truth about this rough class we've had. Not all of them are awful. In fact, there are so many who are darling and wonderful, but they are overshadowed. A class is determined by its worst students, no? You know it's so true.

Apathy has been a major battle all year. Although I do not have too many students who are failing, I have far too many who have Cs and Ds--and not because it is beyond their ability levels. For most of the year, the apathy has resulted in missing assignments, and worse yet, missing final writing assessments and major projects. Those students made the ones who turned in poor quality work look like geniuses. Such frustrating performance for an accelerated class.

Two of my classes are difficult to manage. Of course, one of them is my largest, and there are no more seats available for segregation. Not that it would matter. In that particular class, there are so many chatty Charlies and Cathies that I've given up on any useful seating configuration, except for five, whom you might think I pick on if you walked into my class, but they absolutely have to stay away from each other. That particular class has produced a record number of parent conferences, and for the most part, it has made no difference in anything. Despite all of our efforts, those students are just difficult...immature...distracted--super exasperating!

No joke, I am just plain mean to some of the students. I don't know what else you would expect of me after all we've been through. It would be nice if I could rise above to that teacher quality that makes me a super-being, but I'm just done with it all. My restraint in not screaming, "STFU!" and throwing actual daggers--not just the ones with my eyes--should be good enough. And what does mean look like? From the time they walk in my classroom, my foot is on their backs. Not literally of course. At this point in the year, they do not even have a chance to do the right thing before I assume they will do wrong. Don't shake your head and think, "She is creating the behavior. She should encourage them to do the opposite, and they will." Yeah, well, the psychological ship sank a while ago, and I'm in dying a slow death on a half-inflated life boat.

Oh, but wait! I see land in the horizon! Get me off this boat! HELP ME! Bring margaritas!

Yesterday, the students were working in groups to revise their last writing project and a few students asked me to sign their yearbooks, and so I passed mine around, too. It was a low-key day. I was cringing, hoping that nobody wrote something mean that would ruin the rest of my year, but nobody did. Some of my biggest irritants wrote long, sentimental notes about how they my class was really one of their favorites--even if they didn't do everything they should have... even if I did constantly yell at them...even if I did make them stand because they liked to sleep in class..even though they didn't get good grades, they learned new things. They thanked me for being a good teacher. They told me they would miss me.

Man, do I feel terrible for my animosity toward them at this time of the year.

Wait? Is this a manipulative trick orchestrated by students who use their intellect for evil? Let's get even for her being mean to us. Let's make her think everything was okay! Ten years from now she'll remember me for being one of her best!

So, I guess I'll try to be more patient in the next 8 days. 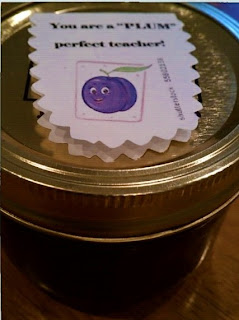 It's finally here! National Teacher Day, the day where the students celebrate their teachers by lavishing them with gifts that cannot be construed as bribes.

Oddly enough, it is one of the few holidays in our country that doesn't encourage people to purchase massive amounts of junk food or expensive greeting cards.

The only best gift I received from a student was a jar of homemade plum syrup. From a student--not a student organization or administrator. Homemade. Witty. Sweet. It's the simple things in life...

(Okay, I'll be honest. The student who brought the jam has been bringing sweet little teacher gifts all week. She's not a brown-noser or anything. She--along with her mother who is an elementary teacher--is just very thoughtful.)

Too bad that the everyone does not get behind lavishing teachers with gifts. Bring on those apples, but please keep in mind that teachers are truly powered by chocolate. I don't care that over the 15 years I've taught I've accumulated 2 teacher coffee mugs, I could always use more; there are seven days in a week, you know! And it is here that I have to admit my personal shame in my lack of teacher-related pencil and ruler-shaped jewelry. By the way, I like rubies are my birthstone, but anything shiny enchants me.

Oh, but in all honesty, I really do appreciate the simple things in life. My students could get a little creative in their gift-giving. Perhaps they could follow all of the rules without acting like they hadn't learned about classroom procedures 9 months ago. Maybe they could turn in all of their homework assignments done to perfection. How thrilled I would be if they listen to me with rapt attention as if they truly believed I am the smartest person they know. Now, that would be a great gift to the average secondary teacher!
Posted by HappyChyck at 5:23 PM 1 comment: