It all started when I looked at a student and thought, "He kind of resembles my son."

And then I started thinking about my son when he's in middle school. I sent his sister, who just started 6th grade, to her zoned school, but he may not have that choice because he's a much different kid, so I had a flash about what he might be like when he makes it to 8th grade, possibly even sitting my class.

Four years from now that would be.

I thought, "Four more years of this? Same old stuff. Year after year. Oh. My. God. I'm bored silly from doing the same lessons four periods in a row today. Could I really do this same stuff four years from now?"

And it depressed me a little.

That all happened in just a moment while I waited for students to copy some notes about effective conclusions from the Power Point slide. It was a breath. A blink.

Yet also a deep, sinking feeling.

...A little later, while I was sorting some papers, the floor tilted a bit, and I had to lean to catch my balance.

"Wait!" Didn't I have a Jennifer Munoz last year? And Rodriguez. I know I had a few of those. What were their names? Brian...Ana...Jazmin...Could it be? Do they have the same names as students from last year."

I usually don't get so unbalanced at the thought of another 15 years of teaching. I don't have aspirations to move to another school to start over. I like my position, and most days it's neither miserable nor enchanting. It just is, and at this point in my life, I'm totally okay with that. But today, I didn't feel so okay.

So what's the deal? Cracks in my contentment? Or something more base, like the need for less caffeine?
Posted by HappyChyck at 10:29 PM 3 comments:

Tonight, I turned around and gave a little kid who was jumping up and down in the booth behind us the stink eye. My daughter almost fell out of her seat from laughing so hard, but it worked. The kid stopped bouncing.

I have a particularly strong stink eye: it's been known to make naughty children hide behind their parents in the grocery store. ﻿And well they should, the rotten little stinkers who run around the store or whine and cry when they don't get their own ways. Grrr.

My eye is strong because it's probably the most exercised part of my body. Well, that, and the fact that it takes a particularly potent eye to work on teenagers. That probably explains why just a 3-second glance is enough to settle down a bouncy 5-year old .

By the way, some parents don't appreciate it when strangers reprimand their children, so that short glance usually goes unnoticed by oblivious parents.

It's really too bad that more parents don't learn how to use the stink eye as a nonverbal discipline tool with children when they are very young. With my own children, it usually* just takes the eye, and maybe a finger point to change a child's behavior when we are in public. It's true that the older the children get, the less effective the eye can be, as I have discovered that my hairy eyeball is merely an amusement to particularly hardened teenagers; however, parents can get a lot of mileage out of it between the ages of toddler to teen.

Once they become teens who outgrow the eye, I think the foot is probably the best bet. Unfortunately, it's pretty much against the law, or at least social standards, to use it.

Fantastic or Craptastic Year Ahead? 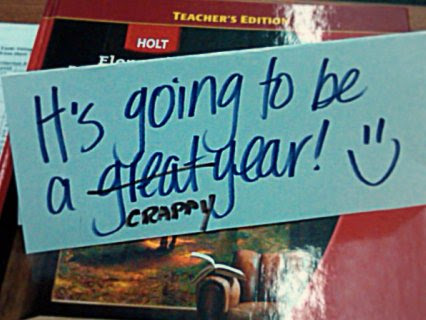 This is a little note to myself on my desk, and today after I came back from meeting with some colleagues, I found all tagged up. Another prankster colleague is surely the culprit, but it did make me take pause.

It's been a hard week.

Thank goodness for a three-day weekend.
Posted by HappyChyck at 9:01 PM 2 comments: